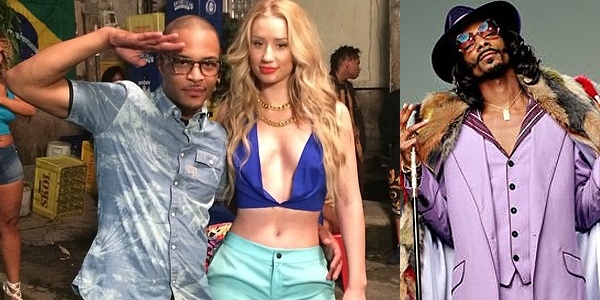 NY Daily News: It’s been a doggy dogg world for Iggy Azalea since a online feud erupted with Snoop Dogg.

Now, the Long Beach rapper has issued a public apology on Instagram to his fans, saying, “It’s officially over. No more bad talk. I apologize. I’m sorry. I won’t do it again.”

The 42-year-old emcee indicated his change of heart came after speaking to fellow rapper, T.I., who apparently advised him to squash the beef with Azalea.

“Hey boys and girls. I just got off the phone with my boy Tip, the King of Atlanta,” he said at the start of the video before apologizing.

The Aussie rapper was the brunt of Snoop Dogg’s online jokes since makeup-free photos of her surfaced recently.

While the “Young, Wild, and Free” rapper deleted his initial posts poking fun at the “Fancy” emcee, he didn’t hold back Wednesday morning after seeing Azalea’s response.

How Iggy Azalea was when Snoop Dogg put her on blast â€¦” he posted on Instagram along with a photo of Shawn Wayans from the 2004 comedy “White Girls.”

“U finished b—h cuz I got a lot more where that came from u funky b—h u!!” he captioned the pic obviously pissed about the claims Azalea was making about him.

“@SnoopDogg why would you post such a mean pic on insta when you send your body guards to ask me for pictures every time we are at shows together?” the 24-year-old rapper tweeted then deleted after Snoop’s first dig.

“My bodyguard stopped the fire truck that saved your friend’s life in Canada when he almost burnt down the hotel,” she added among her deleted messages to the “Drop It Like It’s Hot” emcee.

“And every time I’ve ever spoken to you you’ve always been nice as hell,” Azalea continued. “I’m disappointed you’d be such an ass for no reason.”

Snoop Dogg or Snoop Lion, whichever you prefer, didn’t take well to her response and came back with vengeance.

Another Instagram photo he posted early Wednesday was a “White Chicks 2” poster with Shawn and Marlon Wayans in costume and Azalea in the middle.

“Ok last one n Imma leave the b—h alone!!” he wrote before referring to his “white” alter-ego. “Hahahahahahah So says Todd.”

But the 42-year-old rapper didn’t stop at attacking Azalea’s looks. He also posted a photo of Nicki Minaj with the statement, “The.Queen.Of.Rap.”

If that weren’t enough, he posted an Instagram video threatening Azalea.

“Say, b—h, you’re f–king with the wrong n—a, and your n—a better check you before I do,” he said directly into the camera.

“Ima be the bigger man in this situation and leave it be,” the “Black Widow” rapper tweeted Wednesday in response to Snoop’s tirade. “It’s like the guy that asks for your number and then says you ugly and a b—h when you say no.”

“It’s over I’m bac on my cool s–t,” Snoop captioned his video apology. “No harm, no foul. #ifitaintaboutthe much love @troubleman31t respect sorry bout that.”