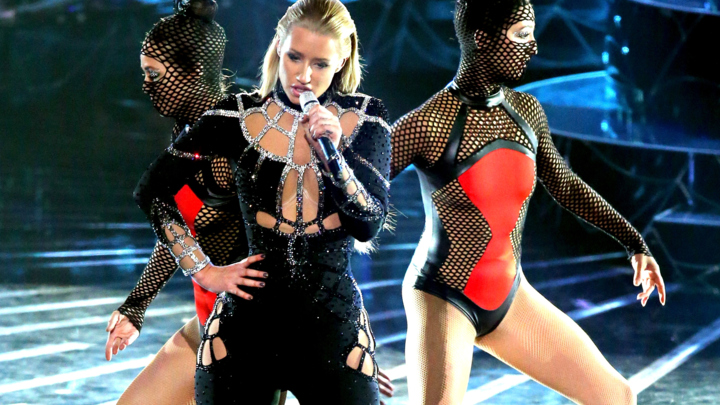 RollingStone.com: While Iggy Azalea and the Beatles are the only acts in history to have their first two singles simultaneously ranked in the top two spots of the Billboard Hot 100, the Australian rapper has now accomplished something the Fab Four never did: Perform at the MTV Video Music Awards. Fresh off winning an award earlier in the night for featuring on Ariana Grande’s “Problem,” Azalea was joined onstage by Rita Ora to perform their The New Classic hit “Black Widow.”

Azalea and Ora really committed to the song’s theme, wearing tight-fitting sequined catsuits that resembled Spider-Man’s black symbiote suits as they performed in front of a spider web backdrop. And there were the backup dancers in red hourglass outfits, too. Of course, in a night filled with prime-time posteriors, Iggy made sure hers was also prominently featured.

However, the most noteworthy part of Azalea’s performance was what was missing: She didn’t use her VMA spot to also perform “Fancy,” which was strange since the track was up for Video of the Year. The “Fancy” omission was even more surprising considering Charli XCX was also in the house after performing “Boom Clap” on the red carpet.

Unfortunately for the rapper, soon after her performance, Azalea learned that the Video of the Year award went to Miley Cyrus’ “Wrecking Ball.” But the most awkward Azalea moment of the VMAs was probably when Ariana Grande won a VMA for their joint hit “Problem,” as Azalea neither joined Grande on stage for the acceptance speech nor looked particularly happy that Grande won.

Jennifer Lopez introduced Azalea’s performance and revealed that the Aussie rapper would be appearing on some upcoming J. Lo tracks, including a remix of her current single “Booty.”

Iggy to Ariana Grande on the VMAs: “I hope you win, but I hope I win more”