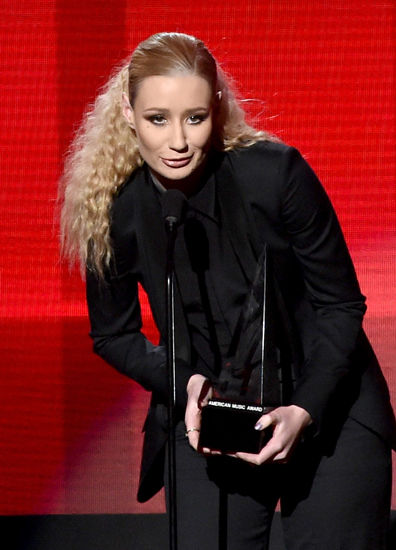 Iggy Azalea was one of the top winners of last night’s American Music Awards. The Australian singer took home an award for Best Hip-Hop/Rap Artist and Best Hip-Hop Rap Album, for “The New Classic.” She beat out Drake and Eminem in both categories.

In an emotional speech when winning her award for Hip-Hop artist, Iggy said: “‘It means so much to me that it is for Best Hip Hop because that’s what inspired me to move to America and pursue my dreams. It’s what helped me when I was a teenager to escape and get through my life and to better times,” she also thanked T.I., who was on stage with her during the acceptance.

During the show, Iggy performed twice, one for “Fancy” and another time which she joined Jennifer Lopez for a “Booty” performance. Out of the 4 others awards she was nominated to she lost Artist of The Year to One Direction, Single of The Year to Katy Perry’s “Dark Horse”, who also took the Best Pop Artist award and Best New Artist to her Australian fellows teenage band 5 Seconds of Summer.