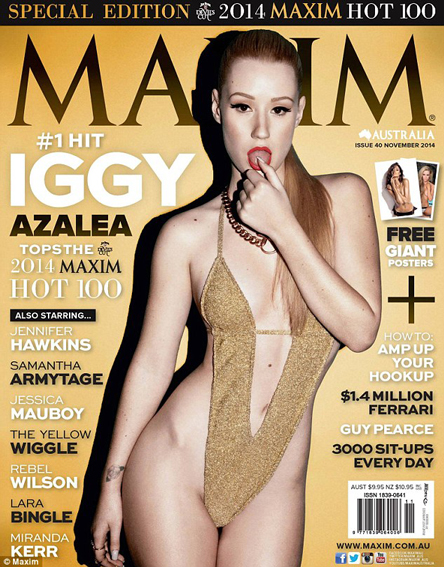 Iggy Azalea was considered by Maxim Australia the Hottest Woman on earth on their annual Top 100 list, but the rapper was not pleased with the picture the magazine used in their cover. Azalea is mad the Australian division of her label authorized Maxim to use a 3-year-old picture of the singer wearing lingerie.

Iggy was mad the photo, which wasn’t copyrighted to her label nor to Maxim, is being used in the magazine. Her image, although visually appealing, was used for one of the numerous modeling jobs she had taken before becoming an internationally famous rapping star.

Azalea said via Twitter that the Aussie division of her label does not have authorization to let magazines use pictures of her which had been published elsewhere, specially images which had been printed in other major publications. The “Fancy” songstress said her Australian reps have disrespected her wishes of not letting older photoshoots be used for new magazine covers.

Iggy Azalea has even said she would gladly have given an interview and made a photoshoot for Maxim Australia if asked. The magazine replied stating they’ve contacted both her U.S. and Australian managements and got denied by the two.

The photo used for the cover of Maxim australia Top 100 2014 Women (above) was originally shot for and published in Complex Magazine, in 2011.