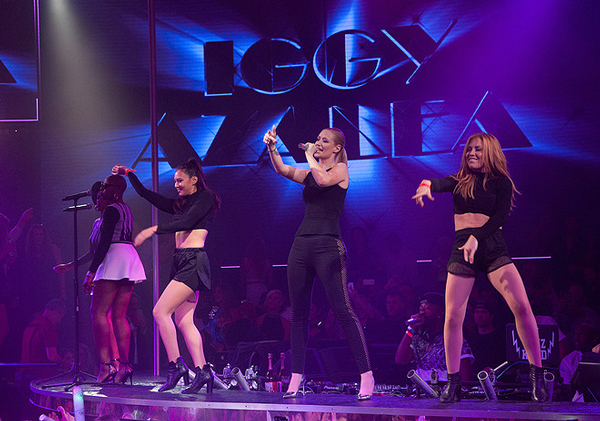 According to Billboard, international rapping superstar Iggy Azalea is the latest celebrity to be confirmed for a Las Vegas New Year’s Eve Party. Every year, several stars from music and movies kick off the new year in Las Vegas parties and clubs, and Azalea is slated for a performance at the recently opened DRAIS Nightclub on the Las Vegas Strip.

Iggy Azalea joins an incredible list of A-listers who are performing in Vegas for The New Year’s Eve, a list which includes Queen of Pop Britney Spears (at Planet Hollywood), Maroon 5 (at Mandalay Bay), Lady Gaga (at The Cosmopolitan) Calvin Harris (at Hakkasan), and Drake (at The Marquee). Vegas is expecting 300,000 people for their 2015 New Year’s Eve celebration.

“There is nothing like Las Vegas on New Yearâ€™s Eve and Iggy is the perfect artist to ring in 2015 at Draiâ€™s,” Michael Gruber, Draiâ€™s managing partner and president, says in a statement. “We have set out to shake up the status-quo with a full concert as part of your nightlife evening, not just an appearance. We are going to bring our nightlife customers and music-lovers the best party imaginable.”

This isn’t the first time Iggy will be performing at the club. On September 20, the hip-hop star made an appearance at the nightclub’s opening night, and she also performed at the occasion (picture above).

Candids: Iggy Azalea picking up her mail in L.A. – November 11