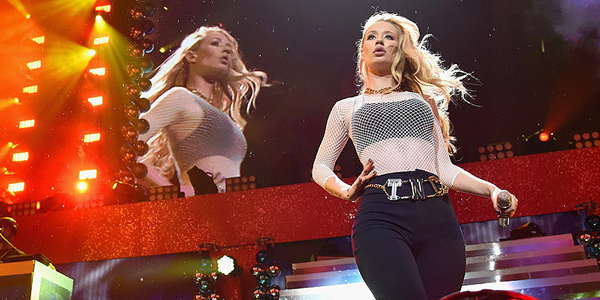 In the Australian rappers’ ongoing feud with Azealia Banks, who doesn’t feel the white emcee has a place in hip hop, which she recently described as “black music,” some of the genre’s hitmakers have tweeted messages about hip hop’s global appeal.

“@IGGYAZALEA hiphop is global now â€¦ it doesn’t matter if your white or black,” Will.i.am wrote Monday in support of the “Fancy” rapper. “Thanks for contributing & spreading our culture positively. It saddens me that people are making a big deal about race in hiphop & not ethics â€¦ today’s ethics goes against our foundation.”

Days after Azalea’s mentor, T.I., and A Tribe Called Quest rapper Q-Tip aired their grievances over Banks comments by providing a hip hop history lesson on Twitter, the Black Eyed Peas member added some knowledge of his own.

“In 1980 a white girl from punk rock group @blondieOFFICIAL helped #hiphop expand beyond the hood with a song called #rapture,” he wrote. “At the end of the day who cares what people think â€¦ do what you love â€¦ stay #fancy â€¦ #congrats.”

In addition to Banks’ strong opinions about the Aussie rappers’ success, a hacking group called Anonymous, is said to have issued threats to release images from a sex tape supposedly featuring Azalea. The Twitter account the threats were issued through has since been deactivated, but not before the group gave Azalea 48 hours to apologize to Banks for her part in the feud.

“Iggy has a place in HipHop,” rapper Lupe Fiasco tweeted to one of his followers. “Her place.”

The 24-year-old “Booty” emcee shot to fame quickly in 2014 while still discovering exactly where her place is in the worldwide, chart-topping genre.

Although she may still be considered a rookie in the game, there’s no way she couldn’t feel gratitude by veteran rappers backing her.

“Thanks lupe and will iam what you guys said was really nice and I appreciate it,” Azalea tweeted Monday. “Most people learn every and anything they can about the subjects they are passionate about, I’m no different.”

The “Change Your Life” rapper then proceeded to go on a tirade about her place in hip hop and how she won’t waste any more trying to convince those that already have a “cemented opinion of me.”

“How you feel about me blending musical genres together doesn’t bother me,” she wrote. “No one is making you support or buy pop rap albums.”

Afterwards, Azalea chose to post a message of keeping the peace â€¦ at least over the holidays.

“Now, if you guys don’t mind â€¦ I’m on my Christmas break enjoying it with people I actually KNOW â€¦ in REAL life,” she tweeted. “You should do the same.”

Will.i.am also had a final thought to share, â€œI wish more people cared more about our education vs prisons in America like they do about this @IGGYAZALEA debate.â€