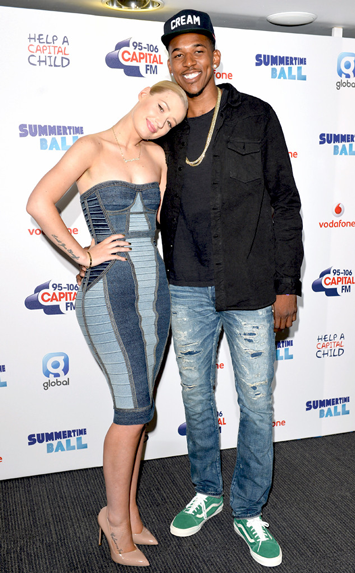 Iggy Azalea has been in the middle of sex tape allegations after Vivid honcho Steven Hirsch revealed that he had his hands on footage featuring who he claims is the young Hollywood star doing the no-pants dance in front of the camera with an ex-boyfriend.

“I believe there would be a huge demand for her sex tape,” Hirsch said in a press release. “Iggy has proved that she’s an amazing talent…We are conducting our due diligence and if we are satisfied with our review, we will definitely try to make a deal to distribute the tape.

obviously I’ve seen the news feed today and i just want to sayâ€¦ I dont have a sex tape but for the record…Anyone who releases or attempts to make profit off someone else’s intimate moments against their will is a sex offender. & it honestly makes me sick to see the media encourage any other attitude towards those sorts of people, we should want to protect our women and i really hope that America will follow Europe and their laws to better protect peoples privacy and fundamental rights.and on that note, I’m off to get a manicure. peaaaaccceeeeeee outtttttt *drops the mic*

Regardless, Hirsch tells E! News exclusively, “There is little doubt in my mind that the person that I saw in the teaser of images from the tape is Iggy Azalea.”

This isn’t the first time Iggy has been in the middle of racy news.

Back in April, the Internet blew up after what seemed to be a super-sexual NSFW photo of the celeb and her NBA boyfriend Nick Young surfaced on the webâ€”but that wasn’t really them, either.

The duo took to Twitter to deny that there were any nude photos of them lingering on the web, and while doing that, the actual couple in the photo stepped forward. Instead of being mad, Iggy gave the duo props! “@KittenChloe: Shawn… our picture is everywhere. People really think that it’s swaggy p & iggy’ < if it really is u, props to u guys," she wrote. Source: E! News