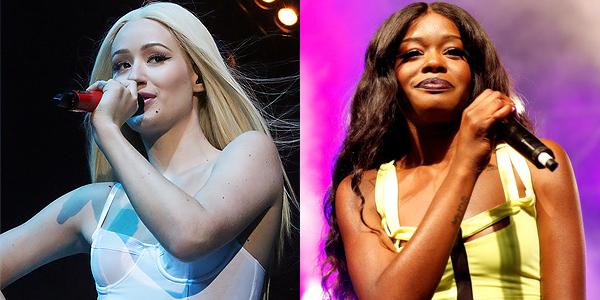 Sharing a name is doing little to bond Iggy Azalea and Azealia Banks. The two female rappers are in the midst of a heated Twitter feud.

The bad blood between the two performers, which has been on and off for two years, started up again on Wednesday, Dec. 3, when Banks, 23, called out the Australian performer, 24, on social media.

Banks was particularly active on Twitter on Wednesday, commenting on the grand jury decision to not indict the New York City police officer involved in the death of the late Eric Garner in Staten Island this past July. Garner died at the age of 43 after being put in a chokehold by an officer. Like many others, the born-and-raised New Yorker Banks voiced her frustration with the ruling, tweeting, “OKAY, what do i do to help this, to stop this???â€¦ How do i get involved?????… Im sick and tired of being sick and tired.”

After posting a slew of tweets about the ruling and race relations in America, Banks turned her attention to Azalea, first making thinly veiled references to the “Fancy” rapper, before actually naming her in tweets.

Banks then brought in Nicki Minaj, who was thought to be feuding with Azalea earlier this year, saying there was no comparison between the two women.
“The media needs to STOP trying to move igloo in on what Nicki has established,” Banks wrote. “Nicki is a hard-working rap-BEAST. stop trying to degrade and BELITTLE Our culture with this f–king kkk iggy s–t.”

She ended her rant against Azalea by tweeting at her directly, writing, “I just really want to know what your fascination with Black women is….. Why do you want to act like us? I need to knowâ€¦ Why do you imitate us in such a way that i feel like you are actually making fun of us? Why?”

“There’s more to sparking a change than trolling on social media,” she wrote. “World issues shouldn’t be used as a poor excuse to promote fan battlesâ€¦ Make sure you do something to let YOUR government know how you feel when something is unjust., not JUST your followers on twitter… Make sure you sign petitions, hit the streets and protest or donate to groups helping to support and rebuild the community too.”

Nick Young’s girlfriend then shared an article suggesting ways for followers to get involved in light of the protests in New York City, and earlier demonstrations in Ferguson, Mo. after the shooting death of Michael Brown at the hands of a police officer.

“Also try not to judge anothers support or ‘lack there of’ solely on if they have ranted on twitter about it, thats not right or helpful,” Azalea continued. “The world is too hung up on what is or isnt said on twitterâ€¦ There’s an actual world out there and multiple ways you can promote changeâ€¦ Be mad but be productive, please!”