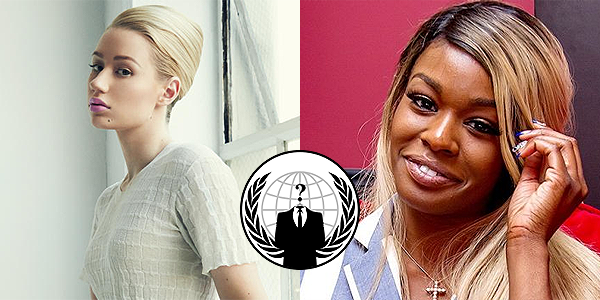 The ongoing Azalea x Azealia feud is being fueled as famous hacking group Anonymous has apparently taken Azealia Banks side on the Internet war between her and Billboard’s top new artist of the year Iggy Azalea. The group is threatening the “Fancy” superstar claiming they have an alleged sex tape, which Iggy made while underage with her then boyfriend Hefe Wine.

Anonymous has sent a tweet to Azalea on Friday night (December 19th) saying she has 48 hours to release a statement apologizing to Azealia Banks and protesters in New York City. The group claims Iggy Azalea is “guilty of misappropriating black culture, insulting peaceful protesters, and making light of Eric Garner’s death,” adding that if she fails to release a statement “the memory of [her] will burn from the public faster than the moment [she] surfaced.”

The group claims to have not only her sex tape but a lot of other things the Australian beau would want to keep secret. They say they will not release the sex tape but will publish some snapshots of it to show they have it. The hackers said to have “so much shit” on her complementing that her “scandal would be bigger than Bill Cosby’s.”

All the threatens were sent out via Twitter on Friday night and Iggy Azalea herself or her management have answered to none, instead, she spent Friday night tweeting about her upcoming 2015 arena tour and retweeting some fans who wrote on having got tickets to see the concert.

Azealia Banks or reps for the singer haven’t said anything on the issue either.

The time the group has supposedly given Azalea to answer back apologizing will be due Sunday night (December 21st 2014).