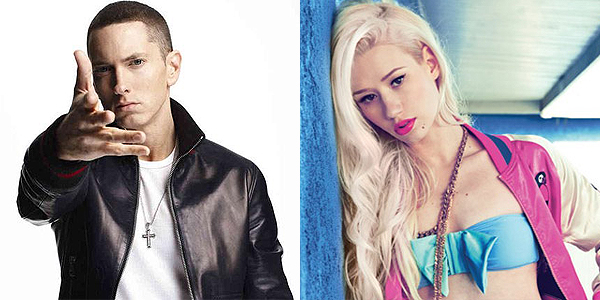 Just a week after Eminem freestyled over punching Lana Del Rey in the face in a leaked song that is allegedly from his upcoming album, titled “Shady XV” (which is due November 24th), another clip by the rapper has made its way into the web and this time another female musician is being targeted by him: Iggy Azalea.

In a minute long snippet of a track titled “Vegas” Eminem addresses Iggy by rapping: “Put that s–t away Iggy / You don’t wanna blow that rape whistle on me / Scream! / I love it / ‘Fore I get lost with the getting’ off.”

Reps from Eminem haven’t made any statement, and likely won’t. Eminem has rapped about polemic issues and celebrities in a negative or pejorative way many times. He has dissed various other female celebrities including Britney Spears, Lindsay Lohan, Mariah Carey and Christina Aguilera.

Via a series of 3 tweets, Iggy Azalea stated the following:

im bored of the old men threatening young women as entertainment trend and much more interested in the young women getting $ trend. zzzz its especially akward because my 14 year old brother is the biggest eminem fan and now the artist he admired says he wants to rape me. nice! women in music have the bigger balls anyhow we endure much more harassment and critic. good morninnggggg!!!!!! off to camera block for AMAs!

You can hear the clip of the leaked track here: http://www.youtube.com/watch?v=lIcyF107Awk