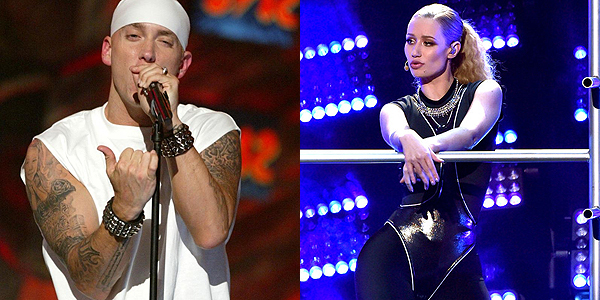 YouthHealthMag.com: In this latest track, it would seem that Azalea’s rap rival is saying sorry for all the “pain” that he has caused through his violent lyrics. Although he did not mention the “Fancy” singer’s name, many are assuming that this was his means of subtly apologizing to the beautiful rapper.

It would appear that the Iggy Azalea and Eminem feud is already over. If the rumors are true, then Slim Shady is attempting to make amends with Azalea through his new emotional song. Additionally, he could not be sending his apologies to the “Booty” singer alone. He could be apologizing for his long history of abusive lyrics towards women in general.

Eminem has been quite known for dissing female celebrities and musicians, such as Britney Spears, Kim Kardashian, and others, Iggy Azalea being his latest victim.

A day after Azalea dissed him when she gave her acceptance speech at the recent American Music Awards, Eminem opted to earnestly rap about “all the pain” that he has caused.

His “Guts Over Fear” lyrics say, “It just breaks my heart to look at the all the pain I caused / But, what am I gonna do when the rage is gone? / And the lights go out in that trailer park / And I’m frozen ’cause there’s no more emotion for me to pull from / Just a bunch of playful songs that I made for fun.”
These lyrics are truly a far cry from his “Vegas” lyrics, which said, “Put that sh*t away, Iggy / You don’t wanna blow that rape whistle on me / Scream / I love it.”