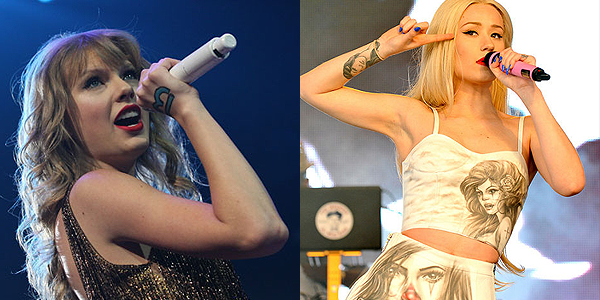 Music superstar Taylor Swift, whose recently released 5th album “1989” bowed the charts with 1.287 million copies sold in one week, said she wants rappers Iggy Azalea and Nicki Minaj to join her on stage for her “1989 World Tour”, set to kick off May 20, 2015 in Louisiana.

In an interview to TIME Magazine, Taylor said she would love to have some of her favorite artists joining her on stage during her tour, she said: “I love Iggy Azalea, I love Haim. Iâ€™d say Vance Joy, but heâ€™s opening up the tour, so heâ€™ll be there anyway,” Taylor says. “The things that I try to really focus on when bringing out people surprise guests is what do my fans really want to see, what would they lose their minds over? Not to show too many of my cards hereâ€”but I have probably 10 guests that Iâ€™m thinking about that would be amazing.”

Taylor Swift has had many music stars joining her on stage on selected dates during her past tours, including Nicki Minaj, John Mayer, T.I. and Usher. It’s not clear if Swift wants Azalea as an opening act or just to make an appearance or two while she’s on the road. The opening acts for her upcoming tour are still in the air, but Taylor has already released the list of dates and cities she’ll playing in.