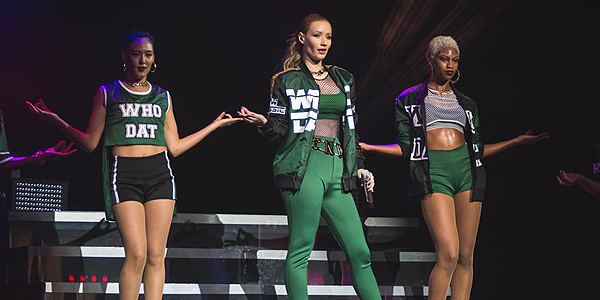 A group of students staged a “die-in” protest in front of the auditorium at The University of Southern California on Thursday (December 11th) where Iggy Azalea was performing at the closing night of The Yahoo! On The Road series of concerts.

The demonstration was one of the dozens that happened across the nation following the supreme court’s decision of not indicting white officers who killed Michael Brown and Eric Garner, unarmed black men, earlier this year.

“We want to be very clear about the fact that black culture seems to be loved a lot more than black people in this country,” said Lauryn Riley, one of the protest organizers.

The protesters chose Azalea’s free gig as the rapper is constantly accused and criticized for appropriating black culture and black music within her aesthetics and specially for not speaking publicly on the issues surrounding the black community in the United States.

Earlier in the week, mouthed rapper Azealia Banks, voiced her anger over Iggy for the same reason via Twitter: “Itâ€™s funny to see people like Igloo Australia silent when these things happen, Black Culture is cool, but black issues sure aren’t huh?”, she continued by saying: “Everybody wanna be black, but donâ€™t nobody wanna be black.”

Although Azalea responded Banks saying that Internet trolling and serious issues should not be used to promote fan wars, she did not address the protesters outside her concert, and the show went on without a problem.