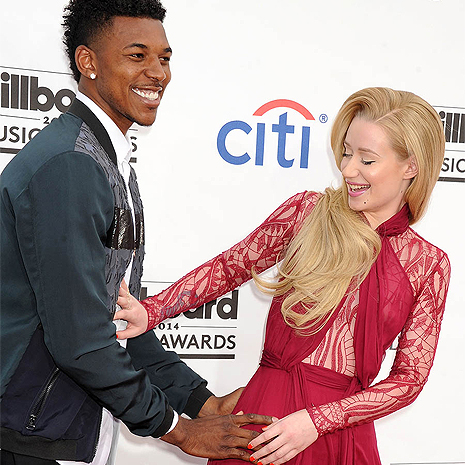 It sounds like Iggy Azalea and Nick Young’s relationship is getting pretty serious!

In a new interview with Du Jour magazine, the 29-year-old Lakers player admits he and the Aussie rapper recently took their romance to the next level by moving in together.

“Growing up I always wanted to be married and have a family, and it’s difficult. I ask [my parents] every day how they do it. It’s a process,” he told the mag. “Me and Iggy just bought a house. We’ve been getting really close lately. I’ve never been with somebody like this. So, I’m taking it as a challenge.”

As for getting engaged, Nick says the topic of marriage has “come up a couple times.”

The sports star also revealed what Iggy is like behind closed doors. “From her songs, I thought she’d be all about going to clubs and partying, but it’s the opposite of that,” he says. “She wakes up early every morning to take care of her dogs, and she cooks for me. From her rapping, I was very surprised that she could do all that. She’s a really cool, down-to-earth person.”

But like every couple, he and Iggy have their arguments: “We fight over the TV remote because she watches TLC and the Weather Channel all night,” Nick said. “We argue all the time, but we get it worked out. We understand each other.”