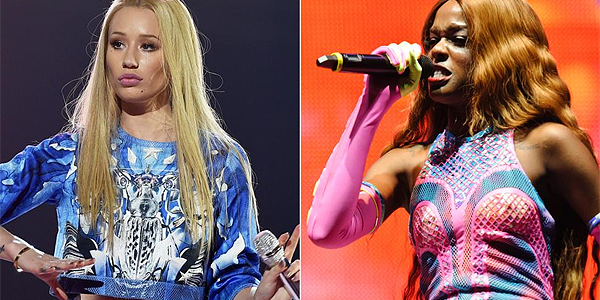 Iggy Azalea and Azealia Banks had another Twitter showdown after the latter explained her dislike for the Aussie artist.

During an interview with New York radio station Hot 97 on Thursday, Banks often became emotional as she detailed why she has issues with Azalea.

“I feel like in this country, whenever it comes to our things, like black issues or black politics or black music or whatever, there’s always this undercurrent of kinda like a ‘f— you,” she said.

“The Grammys are supposed to be accolades of artistic excellence,” she added. “Iggy Azalea is not excellent.”

She added that award shows like the Grammys recognizing artists like Macklemore and Azalea sent a problematic message.

â€œWhen they give these Grammys out, all it says to white kids is, â€˜oh yeah youâ€™re great, youâ€™re amazing, you can do whatever you want to.

â€œAnd it says to black kids: you donâ€™t have s—, not even the s— you created for yourself, and it makes me upset.â€

The â€œFancyâ€ rapper got wind of Banksâ€™ radio interview and fired back on Twitter.

â€œSpecial msg for banks: There are many black artists succeeding in all genres. The reason you haven’t is because of your piss poor attitude,â€ she began her Twitter rant.

â€œYou created your own unfortunate situation by being a bigot and don’t have the mental capacity to realize yet,â€ she continued. â€œProbably never will.â€

â€œNow rant, make it racial! make it political! Make it whatever but I guarantee it wonâ€™t make you likable & THATS why ur crying on the radio,â€ Azalea tweeted.

Banks responded with some angry tweets of her own.

â€œDear LordT, I Pray for this Clueless White Girl,â€ she responded.

â€œNone of this will make sense to her until she herself has children with a black man and has to deal with having black children in America,â€ Banks continued. â€œThe interview was about things way beyond your mental capacity.

â€œItchy Areola, you are so stupid and selfish to make any of this about yourself in particular. My tears had absolutely nothing to with you and everything to do with society and the media in general.â€

Banks wasnâ€™t done discussing her interview and the Twitter fallout with Azalea. On Friday, she took issue with how the media was reporting on their feud.

â€œLook how the white media publication uses a bad picture of me to sensationalize their point,â€ the rapper tweeted, along with a link to an article.

â€œDo you see how much of a general attack on me there is personally JUST BECAUSE i am a black woman speaking about things that matter to ME,â€ she added.

Soon after voicing her frustrations, Banks got props from a fellow music star: Solange Knowles. She retweeted Banksâ€™ comments and then voiced her support for her, tweeting her â€œthank you.â€