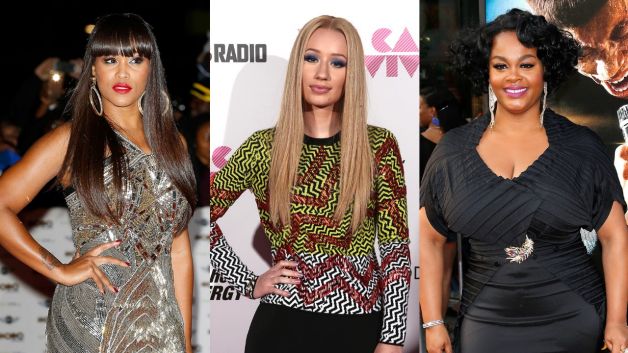 BET.com: It seems like everybody is weighing in â€” for better or worse â€” on Iggy Azalea these days. The Australian rapper caused quite a stir for being dubbed the “Princess of Hip Hop” by the mainstream and for her recent Grammy nod for Best Hip Hop Album.

This week, game-changing female rapper Eve and soul singer Jill Scott threw their two cents in when they stopped by Shade 45 for Sway Callowayâ€™s radio show and discussed cultural appropriation in hip hop.

When asked her thoughts on what people are calling the â€œwhitewashing of hip hopâ€ because of artists like Azalea, Eve had this to say:

â€œI get that people may be upset about certain things. Yeah sheâ€™s white. But they grew up with our s**t. Hip hop is everywhere…Yes, itâ€™s from us and itâ€™s our thingâ€¦[but] sheâ€™s representing a group of girls right now as wellâ€¦Let her do her thing. You know, itâ€™s not my cup of tea but sheâ€™s representing for somebody. Sheâ€™s doing her thing.â€

The Philly MC turned actress and fashion mogul then added, “I think she’s fly, I think she’s good to look at, I think she’s a pretty girl, she has a dope body. All of that is fine. I just wish there was a little bit more of where she came from…it would be dope to hear her with her swag. What are you, who are you and what is that?”

Jill Scott, who stars with Eve in the Lifetime movie With This Ring, chimed in, â€œItâ€™s a little challenging for me because I come from the era that she pulls from. To me, itâ€™s like a mixture of Da Brat and Eve the way that it sounds. So thatâ€™s a little challenging to me. But Iâ€™m a mixture of Sarah Vaughan and five other things. So somebody else that comes from that era, they looking at me likeâ€¦ she alright.”

Sounds like these two aren’t exactly jumping on the bandwagon of hate against Azalea, but they certainly fall short of endorsing her.